The movie is good. Without a doubt. But a little too Christian for my taste.

For starters, the protagonist is called Adinath, meaning ‘Lord of the beginning’. This is not a Hindu concept, and I have never heard it used by anyone to refer to (any) God. It is used by Jains, but V. Shantaram is not concerned with it, he is concerned with making something he can sell in the west. 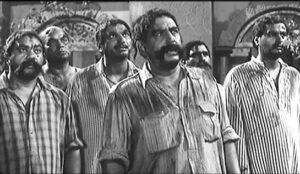 I might be forgetting some more points, but the fact that the movie is all about Christian morality being bestowed over lowly Indians is beyond doubt. Not to mention that the director’s other movies also bear his trademark of pandering to a Western audience.

Due to this reason I put this movie in the same category as The Birth of a Nation, though probably much more thinly veiled and not as controversial. And looking at current-day India, probably apt.

EDIT: It won the Silver Bear Grand Jury Prize in 1958.