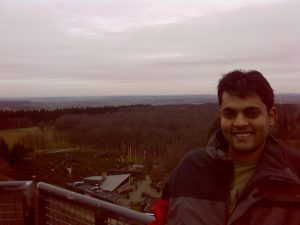 December 2007 at the Dreiländerpunkt. You can see the labyrinth in background.

That aside, Varanasi is also home to some of the oldest traditions of India that are one the verge of extinction. It also has Chaukhamba Sanskrit Prathishthan and other similar publishers who publish and sell extremely ancient Sanskrit texts written in India, including ancient religious texts.

Plus, Varanasi is one of the most important places for people who love Indian classical music.

My first desktop had 768 MB RAM, with Athlon XP 2600+ processor and a crappy Via KM800 on my motherboard, to be consumed on LG 17″ monitor. I left it with my father after completing undergraduate at Indian Insitute of Technology – Kanpur in 2006 and moving to Universität Stuttgart. There somehow I survived on university resources 😀 when one fine day, while strolling through a fair market just in front my office, I had the pleasure to lay my eyes upon a IBM ThinkPad 560X. I paid 25€ for using it as a music system and installed Windows 95 and Slackware on it. Around two weeks or so later, I accidentally left it near my window when a heavy breeze came and ruined its keyboard and I had to throw my first laptop away. So I ordered a MSI VR610X notebook online on a student discount, which went through 2 repairs under warranty before it ran its full course in 2 years and ended up with a dead motherboard in 2010. I replaced it with a small Dell 13″ laptop which was still functioning, albeit with a funky touch-pad, when my love of gaming rekindled and got my current gaming “rig”.

I have been told I am not a careful user.

Apart from gaming and web-surfing, playing music is also my hobby. I own a second hand Yamaha G-228 guitar (originally bought in 1983). I managed to learn only the basics but I don’t get much time to play it anymore. More details in guitar section.